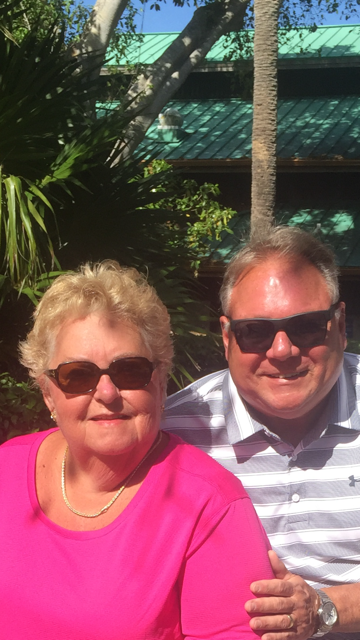 Kismet
But to that one person, you are the world
Beverly and George Hoch from Hillcrest

Beverly and George were both born and raised in Binghamton. Beverly being 9 months older than George says  “I was born on January 24th and 9 months to the day George was born on October 24th.  We always said that on the day I was born God made George for me.  Yes, corny but think about it! We believe it’s true.”

So how did two kids from different parts of the city and different schools meet and fall in love?  Well, it all began with their place of work.  Beverly grew up on the Eastside and attended Binghamton North while George grew up on the Westside and attended the rival school Binghamton Central.  Times were tough back then and both found the need to work two jobs when they were just 16.  And it was at their place of employment that they first met.  George was working at Woolworths and came over to Jupiter, where Beverly was working, to make out an application for a job.  “I was standing there folding towels when he walked in and we got talking.”  By time Beverly was done with work at 9pm she found George was waiting outside for her.  “I knew he was the one pretty quick.”

Beverly says since that time they have always been together.  “We worked together at Verizon with 30 years of service and now we do real estate together – a husband and wife team with Howard Hanna. We have always enjoyed working together.  We have a Great life.”

Beverly and George have 3 children and 5 grandchildren.  They love to travel, enjoy their summers with family in Ocean City NJ and cruise to Alaska and Ireland.  And next year will make 50 years since they tied the knot.

Beverly and George Hoch thank you for letting us share your story.